Express freight despite the coronavirus: Air cargo by helicopter

The coronavirus is not only paralysing public life, the economy is also struggling with the challenge of maintaining supply chains and getting air cargo safely to its destination, in the face of the increasing isolation measures many countries are taking. Particularly companies that manage their logistics according to the just-in-time principle quickly run into problems: the closure of ... [more]

Concrete works on the Lausche mountain 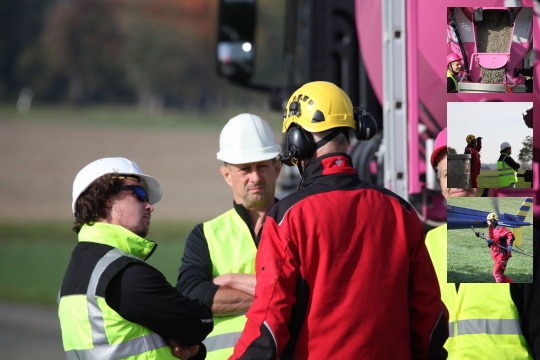 The Lausche is the highest mountain in Upper Lusatia and is known for its picturesque landscape. So that hikers could better enjoy the mountain panorama, a new viewing platform was to be built on the Lausche. The first step was to pour the concrete for the foundations, but this presented a logistical challenge because the path to the almost 800-metre-high summit is not accessible to ... [more] 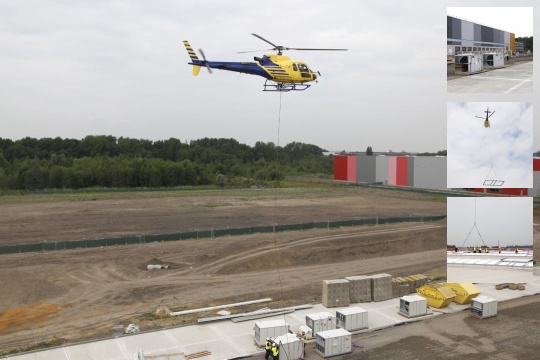 A new logistics centre for the online retailer Amazon is currently being built in Dortmund, covering 45,000 m², the equivalent of the area of six football pitches. We recently took part in this major construction project with a cargo flight: air conditioning units needed to be brought on site and mounted on the roof of the huge hall. The use of a crane was out of the question due to the ... [more]

Helicopter film flight for Honda at the Nürburgring 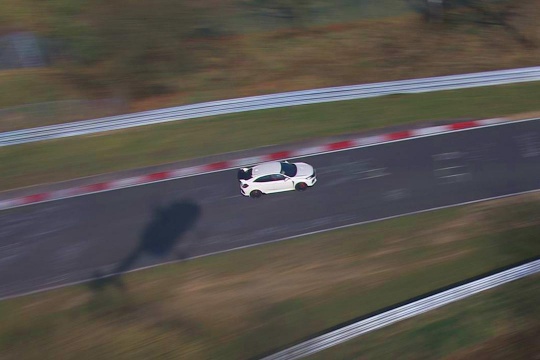 Under contract from the London-based video production company Stamp Productions, Deutsche Helikopter deployed a film helicopter at the Nürburgring in early April 2017. The background to the shoot was a lap record for the new Honda Civic Type-R 2017, which was to be captured on video. Deutsche Helikopter has been tackling demanding film flight assignments at the 'Green Hell' for years – ... [more]

Cargo flight for Siemens in Cuxhaven 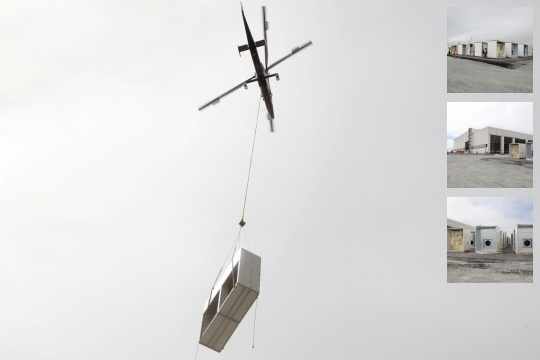 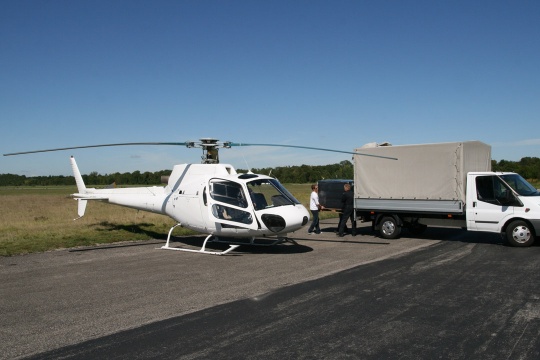 Recently, Deutsche Helikopter transported just under 1000 components from Austria to a production site in Germany for a globally renowned automotive supplier. As the client wanted to avoid additional truck journeys to and from the airport, we used a helicopter for this cargo flight and took advantage of its unique landing capability to pick up the materials directly from the client's ... [more]

Celebrities, politicians and other influential people who value discretion, appreciate the excellent, confidential service that Deutsche Helikopter offers in the field of VIP helicopter charters. Recently, we welcomed a member of the German aristocracy on board our charter helicopter, who wanted to travel incognito and in comfort from Germany to the Netherlands. The aristocratic passenger ... [more]

During an international financial exhibition at Messe Berlin, our customer, a global management consultancy firm, wished to book several helicopter sightseeing tours over the exhibition grounds and the city of Berlin. As part of our all-round service, we made this possible. We also provided a second helicopter as a static display in front of the exhibition hall. We branded this in the ... [more]

For tourists from Eastern Europe, especially from Russia, the Alps have become one of the most popular destinations for private flights in the last few years. Whether skiing holidays, mountaineering, exclusive shopping trips or sightseeing: here you will find everything that a holidaymaker's heart desires. In order to get from the many resorts to the major international passenger airports ... [more] 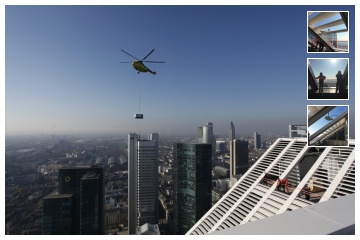 Last Sunday, in the middle of the Frankfurt financial district, we successfully completed a heavy-load installation of a three-piece diesel generator on the Taunus tower. The pilot steered the twin-engine turbocharged Mi-8 heavy-transport helicopter with great precision through the skyscraper canyon and manoeuvred the cargo up to the narrow roof structure at a height of 170 metres, without ... [more] 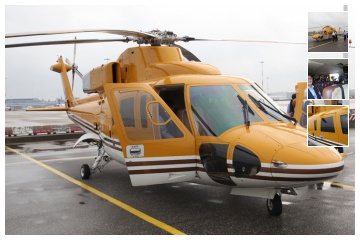 Since the recent renewable energy revolution in Germany, many companies have been investing in the production of renewable energies: offshore wind turbines are becoming increasingly important and will make up a significant part of the energy mix in the medium term. This trend also explains the steadily increasing demand for helicopters as a safe and fast method of transport to offshore wind ... [more] 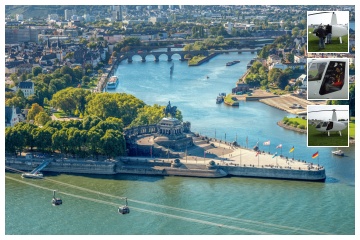 The Moselle is the largest tributary of the Rhine in Germany. The river rises in the Vosges and flows through France, Luxembourg and the German states of Saarland and Rhineland-Palatinate. While gentle vine-covered hills and wide river loops are typical of the Upper Moselle, narrow river meanders and steep vineyards characterise the Central Moselle. In the Lower Moselle region, slate terraces ... [more]

Installation for Vodafone by helicopter 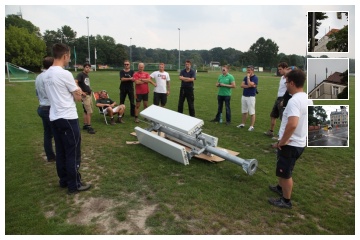 In recent weeks, in the centre of Leipzig, we installed a mobile mast by helicopter for Vodafone for the high-speed Long-Term Evolution (LTE) telecommunications standard. The mast needed to be placed on the pitched roof of a multi-storey house, which was located directly on a main road of the city of 500,000 inhabitants. Trams run along the central strip of the multi-lane road and their ... [more]

Helicopter stunt for a product presentation 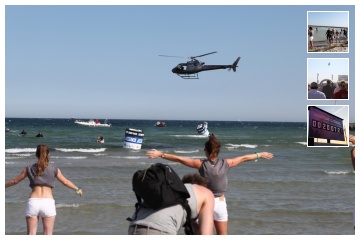 The launch of an advertising campaign for a new car is always something special. Those in charge want the launch to be as spectacular as possible in order to stand out from the competition in a fiercely competitive industry. An SUV manufacturer from the US asked us to do a helicopter stunt for a marketing event on the holiday island of Fehmarn, near Denmark in northern Germany. In ... [more]

Formula One at the Hockenheimring 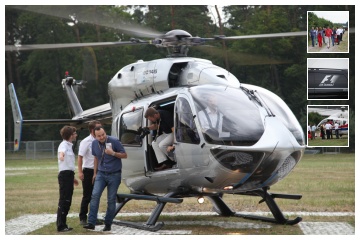 This year's German Formula 1 Grand Prix took place at the Hockenheimring near Heidelberg. The roughly 4.5 km track is, along with the Nürburgring in the Eifel mountains, one of the best established and well-known tracks in the prestigious motor sport. During the course of the race weekend, tens of thousands of visitors gathered again in 2014. Traditionally, Formula 1 weekend is one of the ... [more]

For Amazon in Wroclaw 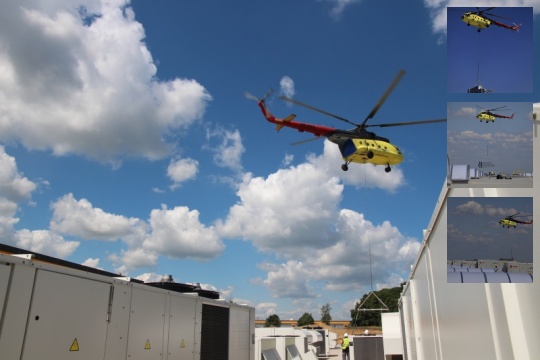 The Mi-8 lifting helicopter belongs to the family of helicopters produced at the M.L. Mil helicopter factory in Moscow. Since the 1960s, it has been one of the largest multi-purpose helicopters in mass production and has since been used all over the world due to its special load suspension system, which allows it to lift loads weighing up to three tonnes. We used the incredible lifting ... [more] 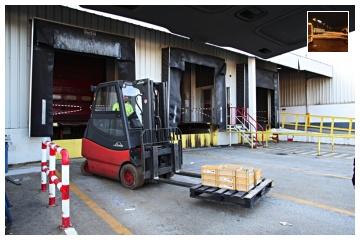 Minute-accurate timing and minimal storage volumes are key maxims of the motor industry. Production parts are delivered to the line at the exact moment when the car is ready for them to be assembled, thanks to a sophisticated supply chain system. Just like clockwork, many variables are reliant on each other and make the system susceptible to expensive assembly line stops. Although most of the ... [more] 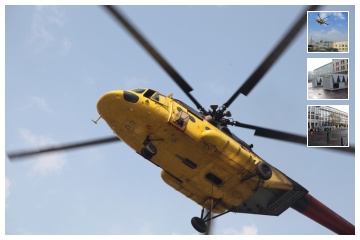 The Mi 17-1 is one of the largest helicopters ever built worldwide. The Russian model has been in mass production since the 1960s and since then has found more than 12,000 customers throughout the world. Due to its size, the Mi 17-1 is operated by three experienced pilots, who can lift loads of up to 4.5 tonnes with the helicopter's 2000 hp engine. We recently used the enormous load-bearing ... [more] 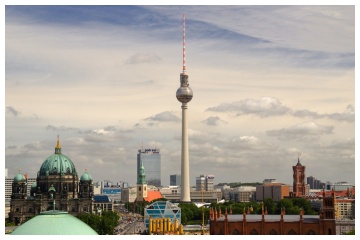 As part of the premiere celebrations for the Hollywood blockbuster World War Z, we arranged a VIP helicopter flight over Berlin. The production company came to us because they wanted to an unusual marketing angle for the film's promotion in addition to the usual advertising. The plan was for Brad Pitt, the lead actor and producer of the film, to give an interview in a helicopter over the city ... [more] 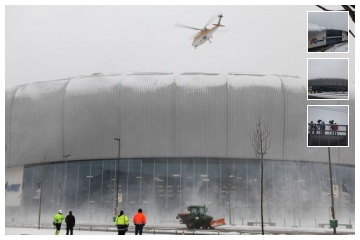 The ISS Dome, not far from Düsseldorf airport, is a state-of-the-art multi-functional hall that holds over 12,000 people. It opened in 2006 and attracts hundreds of thousands of people to concerts and events every year, and also hosts the home games of the Düsseldorfer EG ice hockey team. The return of severe winter weather in January 2013 caused snow chaos throughout North Rhine-Westphalia ... [more]

Cinema production at the Nürburgring

The film flight department of Deutsche Helikopter recently organised another helicopter shoot at the Nürburgring. The international film production, for which we had already coordinated a large number of shoots using helicopters in the summer of 2011, once again made use of the proven expertise of our company. In close cooperation with all the participants, we developed a logistics plan and ... [more]

Filming from a Helicopter with a Tyler Mount

For a leading food-discounter, Deutsche-Helikopter filmed parts of the company in near Karlsruhe and in Cologne from the air. With the help of a Tyler camera mount that was attached to the side of the helicopter, the experienced pilot could easily film out of the aircraft while keeping his feet on the skids. The film production company was highly satisfied. On only one day of shooting, the ... [more]

Aerial Photography for the Ruhr 2010

Deutsche-Helikopter.de photographed the city centers of Bochum, Duisburg, Dortmund, and Oberhausen from above for an exhibition at the Ruhr 2010. Even though he operated with a limited budget and a small helicopter, our photographer managed to take a number of high-quality 360&deg; panoramic pictures. The photographer circled over carefully specified locations in order to take these stunning ... [more]

Deutsche-Helikopter.de organized roundtrips for fair visitors at the largest fair for interactive games and entertainment worldwide. Visitors could win the helicopter roundtrips in a raffle. The winners proceeded to the top of a building in groups of four, where a helicopter displaying the fair logo picked them up. The winners were then treated to a memorable view of Cologne and the ... [more]

For the second time, Deutsche-Helikopter.de used a helicopter to raise radio technology equipment onto the roof of a house in Munich. The cooperation between the logistics team, the cargo helicopter pilot, and the engineers worked seamlessly again. The helicopter flew the first batch of key parts to the assembly area in a special net. Afterwards, the 600kg heavy switch control box was lifted ... [more]